In real estate firm, Vahdat works from ground up 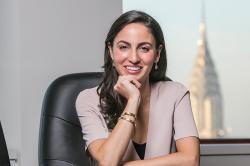 Then, she grabs a hard hat, work boots and flashlight, and heads to construction sites in Harlem and the Bronx to make sure ELMO apartment buildings, homeless shelters and other structures are on track.

“At the end of the day, I’m pretty dusty,” Vahdat said. “I never thought I would be doing this. It’s crazy. But, to see a building go up and then have 150 people living in it — I really like that.”

Her ILR training in negotiation, dispute resolution, labor and other areas is put into practice as she oversees up to five ground-up construction projects at a time.

Working with contractors, unions, architects and others was not how Vahdat foresaw her future while a student at ILR. “I always thought I would go to law school.”

That changed after a summer internship fielding calls from tenants in apartment buildings operated by ELMO, a company founded by her father, Moujan Vahdat, and which now includes 1,800 residential units throughout New York City.

When Vahdat first started, she did a stint as a leasing agent and property manager, and paid company bills, “so I could get a good sense of what the business was like as a whole.”

Now leading acquisitions and new business development, Vahdat is involved in all decisions — from the acquisition phase to determining interior layouts for residences.

“There are not many women in real estate development. But, it’s very hands on, which I love.”

The daughter of Persian immigrants and the first person in her family to attend college, Vahdat said that she is gratified to be working with her brother, Shawn Vahdat, also an ELMO officer, and her father.

Moujan Vahdat was 12 when he immigrated to the U.S. “He grew up as an unbelievably poor kid,” according to Saba Vahdat.

“The reason I work hard is because of him. I have so much opportunity that to not take advantage of it would be a disservice to him.”