Lance Compa and an ILR alum will be part of a group that helps enforce the new North America trade agreement that went into effect Wednesday. 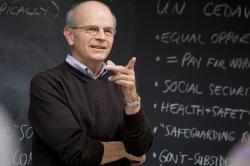 Lance Compa has been named to the Rapid Response Labor Mechanism, a key tool for enforcing United-States-Mexico-Canada Agreement labor protections.

A retired senior lecturer at the ILR School, Compa will be part of a six-person U.S. team announced by U.S. Labor Department Secretary Eugene Scalia. At ILR, Compa focused on U.S. labor law and international labor rights. Compa has extensive experience in labor cases with Mexico and in international labor standards.

The team is the first of its kind and allows the U.S. to take expedited enforcement actions against factories in Mexico that don’t comply with domestic freedom of association and collective bargaining laws, the department said.

The new pact went into effect on Wednesday and replaces the North American Free Trade Agreement.

An ILR alum was also appointed to the panel. Edward Potter, MILR ’72, is an International Advisory Council member at the Institute for Human Rights and Business. For over two decades, he participated on the International Labor Organization’s Committee on the Application of Standards.

“The U.S. Department of Labor is pleased that some of the best and brightest in the labor field have been appointed to this vital enforcement panel of the USMCA,” said Scalia when he made the announcement in Washington, D.C.

“The USMCA has the strongest labor enforcement provisions ever written into any U.S. trade agreement and will help to level the playing field for American workers,” said United States Trade Representative Robert Lighthizer.