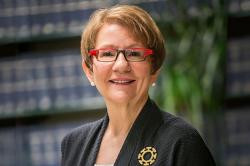 Cornell University’s Esta Bigler, who directs the Labor and Employment Program at the Industrial and Labor Relations School, says that apprenticeship programs are an essential part of the U.S. economy, but that government oversight is needed to avoid exploitation by companies. Bigler is a current member of the New York State Apprenticeship and Training Council, a body that sets standards for and monitors the performance of apprenticeship programs in New York state.

“If industries are allowed to manage apprenticeships without government oversight – either state or federal, companies may use the programs to get cheap labor and fail to provide students with the skills they need to continue in the industry. It is an easy way for students to be exploited.

“There are also implications for diversity and inclusion in industries with apprenticeship programs. In New York, the state Department of Labor and the Apprenticeship and Training Council ask how many women and minorities are graduating from apprenticeship programs and ask questions when we see these numbers slipping. There is still a long way to go, but we need the hand of government to make progress.

“On the other hand, if regulated well, apprenticeship programs are a perfect tool for addressing the skills gap in the U.S. economy. Too many parents believe that every child needs to go to college to get a job, and apprenticeships offer a viable alternative when grounded in educational theory and on the job training.”