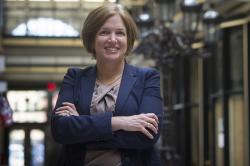 As a child growing up in New York City, labor lawyer Cathy Creighton ’87 saw firsthand the value of unions.

Her mother, who attended school through eighth grade, was a waitress. Her father, who completed sixth grade, worked for the phone company and was a member of communications Workers of America Local 1101.

“That membership, which came with a defined pension and retiree health care, allowed us to have a middle-class life,” says Creighton, now a partner in Creighton, Johnsen & Giroux. “It provided comfort and stability.”

By the time she was in high school, Creighton, influenced by the communications worker strikes of the seventies, knew she wanted to be a lawyer.

At ILR, she was greatly affected by Professor George Brooks’ Union Democracy class. “He opened my eyes to the actual work of union organizing and how labor could help workers,” she recalls.

After graduation, Creighton earned a law degree from the Boston University School of Law and became a field attorney for the National Labor Relations Board in Brooklyn. From there, she joined Lipsitz Green, in Buffalo, as a partner.

In 2002, she helped found Creighton, Pearce, Johnsen & Giroux. The firm, which now represents about 45 unions, became Creighton, Johnsen & Giroux when partner Mark Pearce A&S ’75 was nominated to the national labor board; in 2011, he was named its chairman.

“These were people who worked in factories and were very smart; their unions gave them a way to become intellectually engaged in their work,” she says. “ILR Extension provided the educational foundation they needed to assume leadership. It’s one of the reasons Buffalo became a union town.”

Since its inception, Creighton has been involved with ILR’s High Road Fellowship program. Every summer, the program brings students to Buffalo for research and community service projects fostering economic development.

“To the High Road fellows, she is an exemplary role model and career coach, and to the program, she is a trusted and creative member of the advisory committee,” says High Road Director Lou Jean Fleron.

“She has brought the values of the ILR School not only to her distinguished legal career advancing the rights of workers, but also to her role as a civic leader building a better community.”

Creighton, who helped draft Buffalo’s Living Wage ordinance, is former chair of the city’s Living Wage Commission. She is also a director of the Erie County Fiscal Stability Authority.

In addition, Creighton serves on the Coalition for Economic Justice Workers’ Rights Board, the board of the Lawyers Coordinating Committee of the AFL-CIO and the board of the Labor and Employment Relations Association of Western New York.

“My commitment to labor stems not from something radical, but from common decency — the belief that people should have a voice in their workplace and be treated fairly,” she says.

Creighton is married to New York State Assemblyman Sean Ryan, Buffalo Democrat. Their daughter, Kate Ryan, who also hopes to become a lawyer, is a member of ILR’s Class of 2020.