The Essential Ones: The New York Workers Center Federation 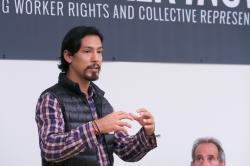 On April 6, 2015, the mother of Carlos Moncayo received a call. Her 22-year-old son had been crushed to death at a construction site in the Meatpacking District. Hundreds of miles away in Ecuador, she could do little but wait as the grim facts of the case began to surface.  Inspectors had reported several violations at the construction site. The morning of April 6th, an inspector warned the company to get workers out of the unfortified trenches. But warnings were ignored until it was too late and the trench collapsed, crushing Carlos inside. Just over a year later, on May 18th, 2016, Carlos’s mother stands in the courtroom, hands trembling, with the members of the New York Worker Center Federation and other worker groups standing behind her as the trial begins. A construction site becomes a crime scene as the officials of Harco Construction deny their role in Carlos’s tragic death.

The New York Worker Center Federation is a multicultural alliance of organizations of day laborers, street vendors, restaurant and food service workers, domestic workers, and laundry workers. We support our member organizations by forming strategic alliances, developing solutions to joint challenges, and preparing the next generation of frontline leaders in the workers’ rights movement. Fighting for justice alongside grieving families is not new for us—the Delfino Leadership Institute, our flagship movement leadership program, was named in honor of Delfino Velasquez, a day laborer and founding member who was killed at his construction job in Staten Island in 2014. The company never received criminal charges.

Among the issues that unite the member organizations of the Federation are the invisibilization and criminalization of the workforce. Like the cases of Carlos and Delfino, the deepest form of invisibility is disposability; work so undervalued that it is not safeguarded; lives so unseen, they are not protected. In NYC, workers like S. Visbal feel invisible, as a nanny caring intimately for someone’s children for extra hours without overtime pay. Or like O. Trinidad, a day laborer standing on a street corner with others day after day at 5am waiting for work. But when these workers become visible, they often become criminalized. Like H. Vivas, a street vendor and grandmother, who is constantly harassed by the police in Washington Heights, where she has been providing a service for the community for more than 15 years; or restaurant workers in NYC threatened with deportation for when they organize for their rights.  Based on these experiences of invisibilization and criminalization, the Federation’s model (Collective Resilience Organizing- CRO) builds on the collective resilience of our members to build power from within and form a strong foundation to address these issues.

Each of our member organizations have led powerful campaigns directed at specific targets, like Laundry Workers Center’s formation of the Hot and Crusty Workers Union, Enlace’s groundbreaking union contract with Sara Lee, and the Street Vendor Project’s efforts to lift the caps on vendor permits. Yet in conjunction with organizing against particular targets and policies, the CRO model echoes the work of movements and groups like Black Lives Matter (BLM) and the National Domestic Workers Alliance (NDWA), who are also reclaiming their role in society and building their power from within.

The CRO model, which builds on the Resilience Based Organizing model of groups like Movement Generation, focuses on addressing oppression and how it manifests, and how in the process individuals build their power. The CRO works to shift the narrative from ‘disposable workers’ to New York’s most essential workforce.

While all participatory organizing models impact power and build leadership, the Federation has begun to amplify and ground this work in four key ways:

I. Creating Visibility and Shifting Narratives - By organizing actions around Night Out for Safety and Liberation, a community response to the National Night Out promoting ‘community-policing’ relationships, we are demonstrating our power and how we make our lives and work visible.  As one worker gets attacked, we all join in solidarity for events and actions, we work to create a presence where the issues that intersect with workers lives are recognized.

II. Centering and Transforming Our Leaders - With our long-term leadership development program, the Delfino Institute, we build a cohort of worker leaders to have the internal and collective resources to build the movement.  Our leaders not only learn valuable skills such as facilitation, campaign planning, and one-on-ones, but also work on resilience-based practices to address their trauma and whole worker identities. The trainers of trainers teach back to a new cohort and begin to create an identity as essential workers, united by their resilience and their struggles.

III. Strengthening Our Organizations - Through projects to collectively build our base, we are working to ensure that each organization can expand their reach in their own communities. Each year we choose a joint goal and develop strategies to support each other’s work. During our monthly meeting, we work closely with organizations to help them shift their internal structures to ensure workers’ voices can be centered. Our steering committee consists of organizers and alumni from the Delfino Institute.

IV. Supporting Alternative Power and Structures for Collaboration - Our worker centers members have built hiring halls, created cooperatives, developed apps to track wage theft, and engaged in creating community responses to protect against raids and non-state based means to address domestic violence. We create collaborative structures, as one organization with experience with police harassment of vendors does a worker-led teach-in for an organization new to the issue, or building a web of community support among our organizations. For example, a domestic worker from NICE was inspired to join the movement by her brother who was organizing with LWC. We build on each other’s resources and create a broad community based network of support. We are a new Federation. While our member organizations are working with limited time and resources, we are experimenting and collaborating to build the structures and processes to advance worker led movements.

Daniel is a queer xicanx with over a decade of experience organizing in Los Angeles, the Bay Area, Chicago, New York, and Internationally. He has organized workers, negotiated contracts, researched and led campaigns for AFSCME, SEIU, and CWA. Daniel has worked in his community around issues of immigration, mass incarceration, LGBTQ, and environmental justice. He got his start as a youth organizing against anti-immigrant law Prop 187 in California and successfully defeating a proposed Power Plant in his neighborhood in Southeast Los Angeles. He founded a grassroots queer immigrant group in Los Angeles Sin Fronteras/ Sin Papeles. With Enlace he was an organizer on the successful Seafood Workers and Tornel Union campaigns, and he launched the Prison Divestment Campaign. Daniel is co-founder of the New York Worker Center Federation. He is based out of the New York City.