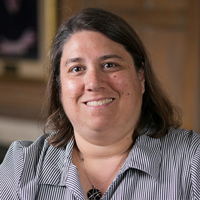 As a critical member of the team focused on ILR’s internal and external communications strategy, Greco concentrates on the office’s storytelling, media relations and analytics work.

Greco joined the Athletic Communications staff as the associate director prior to the 2005-06 season and was promoted to deputy directory during the fall of 2016. As a member of the Big Red she was primarily responsible for promoting the department’s 37 varsity athletic programs, while also implementing coherent communication strategies for the department as a whole. She was the primary contact for Cornell’s nationally ranked men’s lacrosse team, as well as the field hockey, volleyball, women's basketball, fencing, and men’s and women’s rowing teams.

Greco was honored by the College Sports information Directors of America with a pair of national awards, winning the 2017 Fred Stabley Sr. writing award for event coverage, as well as CoSIDA’s Best in Nation award for her 2008 men’s lacrosse media guide.

Prior to coming to the East Hill, Greco spent two years as the assistant director/publications coordinator at Fairfield University where she designed the office’s 13 media guides.

A native of Syracuse, N.Y., Greco is a 1996 graduate of St. John Fisher College in Rochester, N.Y., where she earned a bachelor of arts degree in English and history. She went on to obtain a master's degree in sports administration from Wichita State University in 2002.

Following her time in Kansas, Greco served a pair of one-year sports information internships, first with Virginia Tech University, and then with Colgate University.

Greco resides in Ithaca with her wife, Erin, and twins, Ella and AJ.