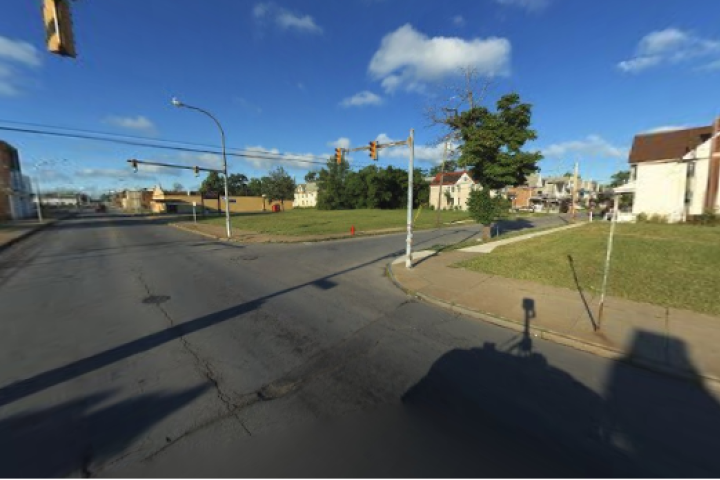 Take a look at this picture above. This is the intersection of Fillmore + Broadway. What do you notice? Bike lanes? Crosswalks at every side? A street with well-painted traffic lines? A lot of good traffic safety markings are in this Google Maps Image.

Now, when you look at this picture below, what do you see? A street? Traffic lights? Nothing else right? Correct. This is the Corner of Jefferson + Riley.

I wanted to bring these pictures to light to show just how drastic Streetway safety is. The first picture is from West Buffalo and the second is right at the corner of TOPS where the massacre happened. Colored Girls Bike Too had a pop-up at this very intersection in the second image. Imagine people trying to cross the street trying to get groceries, but there are no crosswalks or pedestrian signals. Picture bicyclists trying to bike to us for food and there are no bike lanes for them to safely be acknowledged on the road. Many people had to just force their way to cross the street to our food pop-up.  This is what multiple intersections in East Buffalo look like.

This summer in my work advocating for complete streets and streetway safety for pedestrians, I noticed a lot about the discrepancies between streets on the West and East Buffalo. It is disheartening seeing the economic disparity in this community show up in the lack of painted 4-way intersections. The East Side has been neglected economically for a long time now and the comparison of these two images just shows you how the city of Buffalo has stalled on bringing the proper changes and preservation needed to the East Side.

Now, this week's journal asked if politics matter. It is simple. The two pictures say it all.

It is politics that restricted basic street safety in this area.

It is politics that stalled the economic advancement of the East Side.

It is politics that caused a white supremacist to attack this TOPS because it is one of the most densely populated areas for Black people in Western New York.

It is politics that curated food apartheid long before the shooting.

It is politics that halted the success of the Black community in Buffalo altogether.

How can a community gain trust in a political system that has constantly turned its back on them? This question I really do not know the answer to, but I can tell you where it starts.

It starts with more grocery stores in East Buffalo.

It starts with stricter gun control laws so that another massacre like this can not happen again.

It starts with proper street safety!!!

It starts with finally supporting this neglected city with the proper resources it needs.

It starts with officially recognizing the East Side as an equal in the city, not just a neglected add-on.