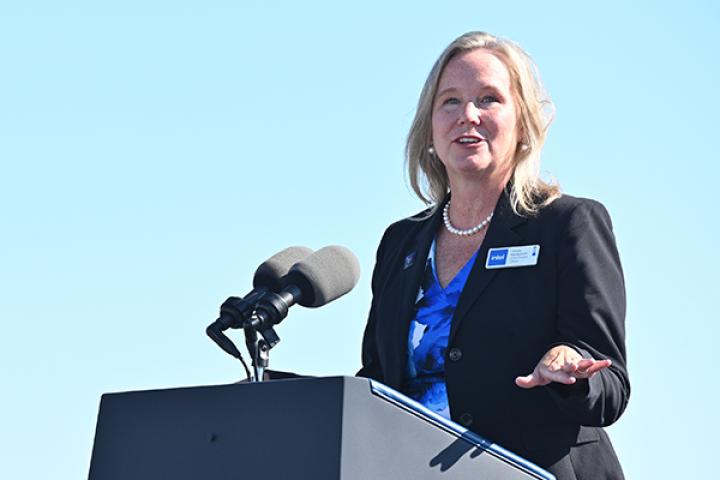 At a groundbreaking ceremony last fall, Christy Pambianchi ’90 was one of a dozen speakers addressing a crowd in Licking County, Ohio. Dubbing the area the “Silicon Heartland,” she spoke of Intel’s $20 billion microchip manufacturing project and the opportunities it will provide for both the Buckeye State and America at large.

After speaking, she took her seat in the front row, opposite a scaled-down version of The Ohio State University Marching Band, and listened as a long list of dignitaries, including President Joe Biden, took to the podium to speak about the project that is expected to create 3,000 Intel jobs and 7,000 construction jobs over the course of the build, and support tens of thousands of additional local long-term jobs across a broad ecosystem of suppliers and partners.

Just over a year into her stint as Intel’s executive vice president and chief people officer, Pambianchi worked with the site selection team, both in the U.S. and in Europe, and took part in the government negotiations that helped bring Intel to Ohio.

“These are transformative operations that will change the lives of tens of thousands of people,” Pambianchi said. “This is a huge career highlight. But we’re just at the shovels-in-the-ground phase. All the hard work is still ahead of me. So this is just the beginning of a really long, but exciting road.”

It is also just the latest large-scale project for Pambianchi, who has spent her career working with Fortune 500 companies. She helped Pepsi, Corning and Verizon build talent strategies to drive their businesses forward, and worked on initiatives that have kept them at the forefronts of their respective industries.

There is little doubt that she is one of the most innovative HR professionals in the business today. It’s a reputation she’s earned through hard work and a willingness to seize every opportunity that comes her way – virtues she attributes to her humble beginnings.

Pambianchi, the oldest of four girls, grew up on a dirt road in Brewster, New York. Her “idyllic” childhood was upended at age 11, when her mother died in a car accident, leaving the girls to be raised by their father, his mother and sister.

“Obviously, that was a very transformative time and I can probably attribute the hardships I experienced as a youth as something that has given me a real appreciation for life,” she said. “I just don’t take anything for granted, and I’ve always tried to take advantage of my opportunities.”

As a junior in high school, Pambianchi wanted to apply for the Japan-U.S. Senate Youth Exchange program. She had already spent a month in Japan through a similar program and was eager to return. Unfortunately, she had missed the deadline for the application, so her guidance counselor suggested that instead of giving up, she should apply for the Congress-Bundestag Youth Exchange Scholarship, which would send her to Germany.

Pambianchi seized the opportunity and after participating in numerous interview panels for “the hardest selection process, to this day,” she was chosen.

When she received the acceptance letter that April, she was just past her 16th birthday and realized that she would have only three months to prepare before spending a full year in Germany.

“It was shocking when it became a reality,” Pambianchi said, “But I just grew exponentially as a person during my time away. I became fluent in German, and I had this amazing opportunity to live in another family, in a whole other culture, and also to reconnect with some distant relatives.

“I credit that experience as what probably made me an interesting candidate to Cornell.”

Pambianchi was interested in Cornell, and the ILR School in particular, because she was looking for a college that would support her love of history, culture, business, law and international relations.

“There were so many of those threads here at the ILR School.”

Pambianchi didn’t always plan to work in HR. She initially had aspirations of becoming a lawyer, but a semester-long internship with a labor law firm in the fall of her junior year made her realize that wasn’t the path for her. She had previously worked with a government agency, spending the summer following her sophomore year in Westchester County enrolling people in a job training program. She had also taken advantage of several WISP opportunities, working on projects for companies like SONY.

“My big, exciting assignment was my junior year when I landed an internship with General Electric in their HR training program,” Pambianchi said. “And that really was like lightning in a bottle. I realized that I loved HR and I came back to ILR and I gobbled up all the HR courses, as much as I could at the advanced levels.”

Pambianchi, who will be honored with ILR’s Groat Award in April, said she loves her profession because not only is it important to the companies she works for, as she finds them the talent and human capital they need to execute their mission, but because it also matters to the workers, who rely on their jobs for personal, professional and emotional satisfaction.

“My dad never loved his job,” Pambianchi said. “And I was a naïve kid and I would say, ‘Quit your job and get a new one,’ and he would say, ‘It doesn’t work like that, Christy.’ So, he never quit. Instead, he did a lot in our community and he found the emotional satisfaction there that he never had in his job. So, I constantly try to find pathways for people to get all of that fulfillment in their job, or have pathways and capacity in their jobs to have that fulfillment in life.”

Pambianchi finds fulfillment through her family – husband Mike, A&S ’89, and children, Phineas, A&S ’21, Sarah, Eng. ’24, Avery, who attends the Eastman School of Music, and high schooler Harry – as well as by sharing her knowledge with others, writing LinkedIn blog posts and instituting programs that help others find their paths.

“I want to positively impact as many people as I can with the knowledge I have,” she said. “I just feel like the world goes round when everybody has jobs. And so how can I be part of creating what I call removing friction out of the ecosystem.”

During her time at Corning, she started the Manufacturing and Advance Placement program, bringing local high school students onsite to show them job opportunities.

“We wanted to show them that this isn't a factory job from the Industrial Revolution in the 1800s,” Pambianchi said. “These are high-tech, advanced manufacturing facilities that offer great compensation, plus benefits, plus college reimbursement, plus advancement opportunities.

“So we showed them the jobs, then held workshops to teach them how they could get those jobs, and then, finally, how to keep those jobs.”

When the pandemic struck, Pambianchi saw another opportunity to help. Serving then as the executive vice president and chief human resources officer at Verizon, she joined human resource executives from Accenture, Lincoln Financial Group and ServiceNow to form People + Work Connect, an employer-to-employer initiative that connected companies laying off or furloughing people with companies in urgent need of workers.

“COVID hit and I was talking with my colleagues at all these other companies, and we had all this collective knowledge, and we thought we could do more than just share best practices,” she said. “We wanted to create a platform that removed the friction from HR teams and accelerated the movement of workers.”

“We worked non-stop, well into the middle of the night, and pulled it together in just 14 days.”

Outside of work, Pambianchi gives back to her community, and to Cornell as a member of the Dean’s Advisory Council, the ILR campaign committee and ILR’s Center for Advanced Human Resource Studies Advisory Board. She is also a member of the President’s Council of Cornell Women.

“I just love the energy on campus,” Pambianchi said. “It gives me the opportunity to reconnect with the professors and the students. And it brings me back in time to when I was a student here. When I got to ILR, after having been in Germany for a year, I just remember thinking, ‘I found my people.’”

“The thing I love the most is the mission of Cornell, which is grounded in giving everybody access to an education. And the more I’ve seen, the more I’ve realized that's not true of every institution. It makes me really emotional, and it’s why I give to the school.